Individuals and societies worldwide are exposed to risks with increasing intensity and frequency. Natural and other hazards or slow-on set events such as droughts and disasters with cascading effects lead to loss of life, displacement and exacerbate inequality.

Current approaches to global threat and risk management within development often look only at one threat at a time (usually a natural hazard [such as earthquakes, hurricanes or flooding]), rather than acknowledging multiple, concurrent threats or emerging global threats. This fails to understand emerging complex risks and ignores the role of development decisions and pathways in risk creation. (ODI & UNDP, 2019)

Extreme events often have a disastrous impact because the state and the population were not sufficiently well prepared and/or the preventive measures in place were inadequate. As the world population expands and urbanisation continues apace, coupled with inadequate health care, fragile statehood or violent conflicts, the risk of disaster also becomes more acute. Those states which are already worst affected by fragility, conflict, and violence often lack the capacity to protect their population from such hazards and disasters. As a result, people and infrastructure become even more vulnerable and exposed to extreme events. Location, age, gender, income group, disability, and access to social protection schemes, health care and safety nets greatly affect the choices, capacities and capabilities people have to anticipate, prevent and mitigate risks. Climate change amplifies these factors. Risks are increasingly becoming interdependent, complex and transnational in nature.

All post-2015 agendas (in particular the 2030 Agenda, the Paris Agreement, the New Urban Agenda and the Sendai Framework) share the common goal of reducing the harmful effects of natural, technological, geophysical and man-made hazards and climate change on society, ecosystems and infrastructure. 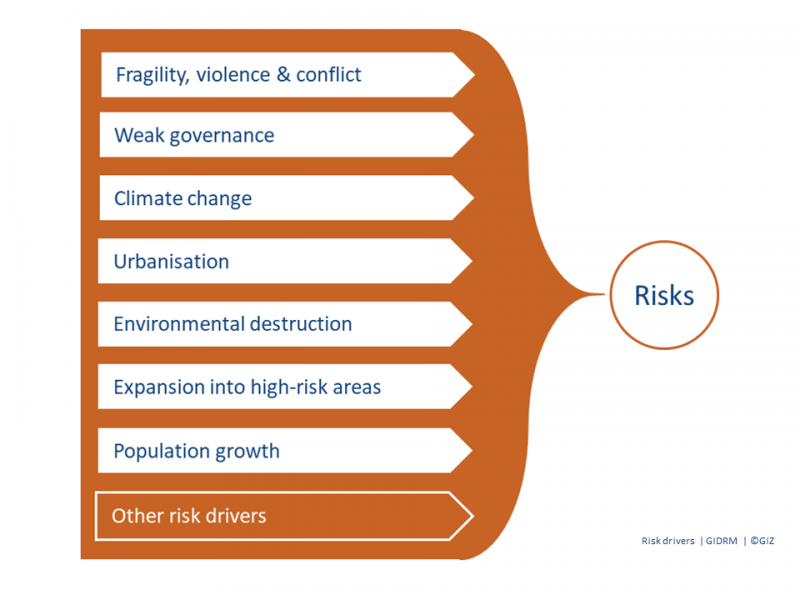 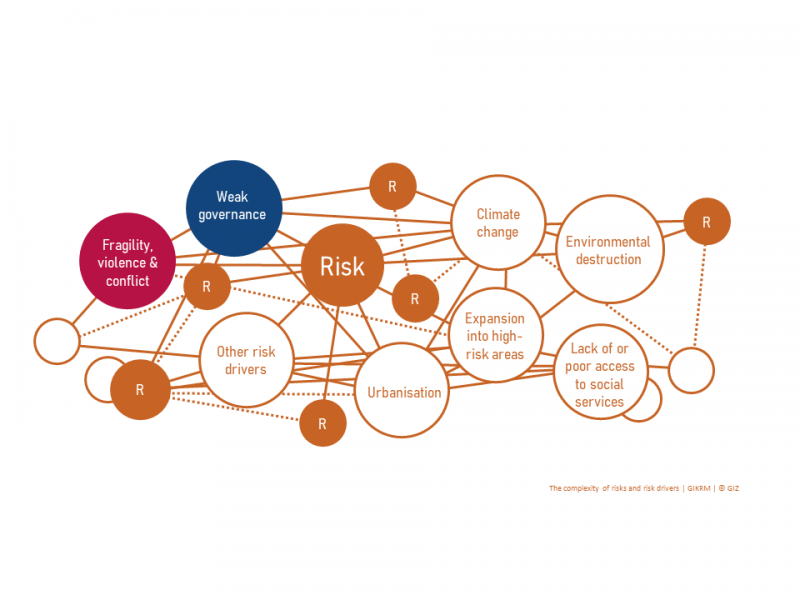 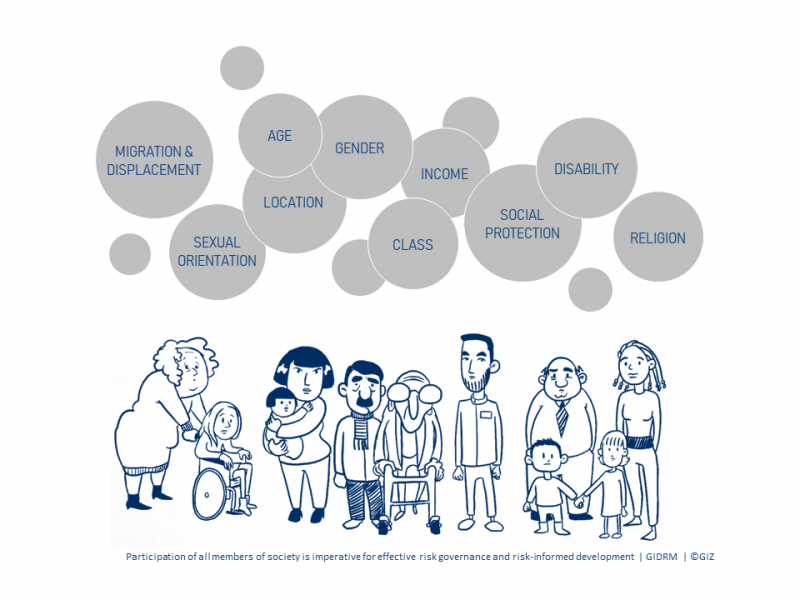 Disasters can suddenly wipe out many years of development achievements and reduce the development opportunities of the affected countries. In spite of the increasing awareness of the complex and systemic nature of risks, they are still not always adequately taken into account in the planning and programming of development measures, whether in the partner regions and countries or on the part of international donors. There is no doubt, that we will need to transform the way we govern risk. A lack of ability to understand and manage systemic risks jeopardizes the achievement of the Sendai Framework for Disaster Risk Reduction (2015-2030) and the Sustainable Development Goals. Advances in poverty reduction, disease control, and access to health, education and social services are fragile and undermined by new and emerging threats.

Against this background, the third phase of GIDRM is geared towards fostering risk-informed development (RID), i.e. an understanding of development that takes into account multi-faceted, dynamic, interdependent, transnational, simultaneous and systemic risks. Stakeholders and institutions involved have to be strengthened in their capacities and competences to make risk-informed decisions. RID helps to enable participation in political decision-making to foster resilience and leave no one behind.

Watch our video on RID here.

What is Risk Governance?

Disasters—just as we are currently experiencing with COVID-19—have impacts on a variety of areas such as public health, economy, governance, tourism, critical infrastructure (e.g. hospitals, transport, water, communication) and can have devastating effects in already fragile contexts. Disaster risk management is a cross-sectoral issue. The greatest single driver of disaster risk is weak governance. Reducing the risk of a disaster requires vision, planning and competence.

The COVID-19 pandemic, in particular, is illustrating the vulnerability and interdependencies of all social policy fields and sectors worldwide. Almost no state was adequately prepared for the impacts and challenges of the pandemic. However, managing the crisis is particularly overwhelming for those countries without efficient state institutions (i.e. weak governance), fragile statehood or those countries at risk from extreme events. The parallel occurrence of various hazards (so-called multi-hazards situations) result in system limits being quickly exhausted. For instance, the number of COVID-19 infected people in Beirut increased after the massive explosion in the harbor in August 2020 and placed a double burden on the health system. The explosion could have been prevented by ensuring proper safety measures at the site.

Often, the expertise, capacities and skills of actors and decision-makers are not yet at a level that would enable them to address risks effectively. It’s all about risk governance. COVID-19 has already demonstrated that a narrow focus on a small set of hazards, by one or two government agencies, is not enough to prevent or even respond to complex disaster risks. Risk Governance aims at systematically understanding multiple hazards and complex risks and crafting development decisions that avoid risk creation (where possible) and enable risk reduction. Risk Governance must be inclusive so no one is left behind. Applying the risk governance lens in all sectors and on all governmental levels is crucial to strengthen risk-informed development. 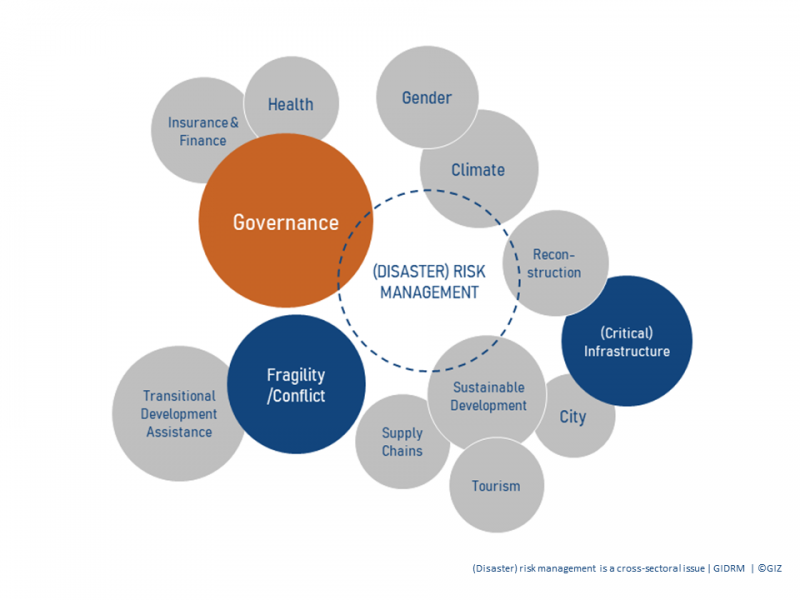 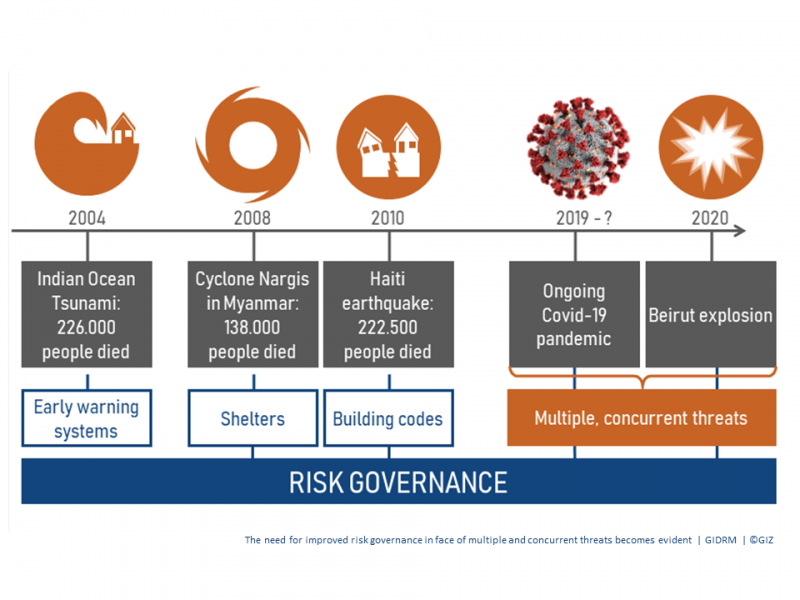 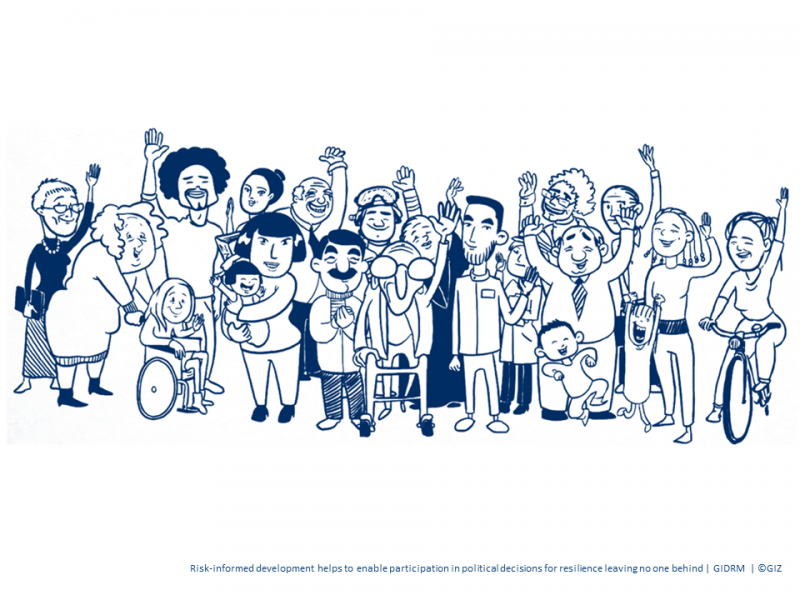